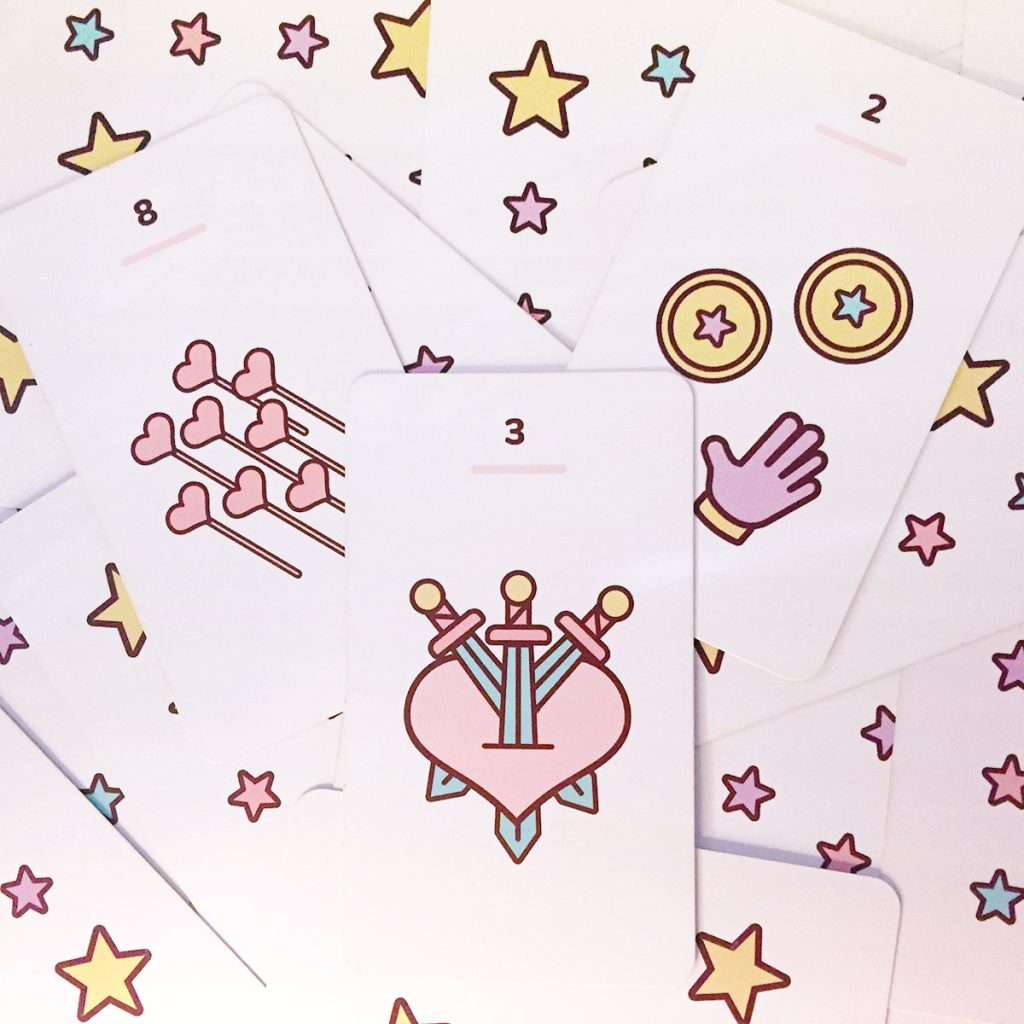 When I first started reading tarot, I couldn’t get enough of practicing memorizing the cards. It felt like it was the most important first milestone I could achieve. Even if I had to reference a book, I at least needed to know each card on a personal level.

At first, memorizing 78 card meanings seemed impossible. The major arcana, aka The Fool’s Journey, was the first thing I grasped. As time went on, the minor arcana continued to seem like an unsolvable mystery, even though I was gaining familiarity with the system behind the tarot.

It seemed to get more difficult actually. Even though I loved tarot, I felt like I lost a connection to my deck. Luckily, I found a blog post on Biddy Tarot that brought something new to my attention: how to clean your tarot cards. I took a quartz crystal and placed it on top of my deck on a window under the light of the full moon.

When I woke up the next day, it wasn’t like I suddenly “got” the minor arcana. But some new wheels were turning in my head that suggested other way to study them. In a series of posts, I want to share with you the methods I used to study the minor arcana after that night. They helped me immensely, and if you’re having trouble relating to the minor arcana, this may help.

First, we’ll talk about each suit on its own as a refresher study each number in different suits. (All the aces, then all the twos, etc.) Second, we’ll go over the story each suit presents from ace to 10, which are also part of The Fool’s journey. Third, we’ll cover the court cards.

Tarot suits and their elements

There are 4 suits in the tarot: pentacles, wands, swords, and cups. The order I placed them in is deliberate! When the tarot was just a set of playing cards, way back when, the suits largely represented the social classes of the time. Of course, it’s not just this simple—many systems make up the tarot like numerology and astrology, so it’s important to think of the suits in their different aspects.

To start with, the pentacles represent the working class. The people who have to think about where their next dollar is coming from so they can pay their bills. So, the pentacles pertain to money, health, family—the material world, as opposed to higher realms. They correspond to the Earth astrological signs (and Earth as an element itself) of Capricorn, Taurus, and Virgo. The pentacles are, for the most part, dependable, reliable, and humble.

The wands in tarot represent the growing middle class of the time. They had their own businesses and so they could worry a little less about dollars and more about self-improvement, making steps forward, and climbing the career ladder. The wands are fiery, passionate, action-oriented, and creative, so they correspond to Fire and Fire signs Aries, Leo, and Sagittarius.

The swords are the upper class and royalty. Because of this, they’re not very “down to earth,” so they correspond to big, dramatic, life-changing actions as well as higher intellectual and spiritual thinking. The swords correspond to Air and Air signs Libra, Aquarius, and Gemini. The swords can be cold and calculating, but you can’t deny they make monumental change in The World.

The cups transcend class. They are representative of feelings, relationships, love, and emotion. The cups can be moody, nostalgic, peaceful, resentful—the suit represents a broad variety of emotions, but the thing they have in common is being driven by the heart and not the logic of the outside world. (For better or for worse.) Cups correspond to the element of Water and to the Water signs in Astrology; Cancer, Scorpio, and Pisces.

The minor arcana by the numbers

So, now let’s look at each of the numbers in the minor arcana. When you see what all the aces, all the twos, and so on, have in common (at the same time, contrasting their differences) it will be easier to connect intuitively with the cards in your readings.

It will help you immensely to have each card in your hand (your preferred deck) while I mention them!

The aces correspond to The Magician in the major arcana and represent the spark of action with a strong independent spirit and inventive ideas.

As you can see, “spark of action” means different things to each suit. The Ace of Pentacles have a humble definition, while the wands are all about going forward with vigor. The swords take “spark of action” to mean mental energy and the cups think of it as a new relationship.

The twos correspond to The High Priestess in the major arcana and represent cooperation and choice.

When it comes to the twos, the pentacles seems to have trouble balancing. The wands see opportunity, as do the cups (though the cups see it as a coming together of people). The swords have trouble, same as the pentacles, but their struggle is internal.

The threes correspond to The Empress in the major arcana and represent self-expression and creativity.

Three is a magic number, so it makes sense most of the suits would have an element of prosperity to them. The pentacles sees it in their work, the wands in their energy, and the cups in their relationships. The swords, however, experience great pain—this is because when swords create, they also destroy.

The fours correspond to The Emperor in the major arcana and represent order and discipline.

How does each suit relate to a gain in discipline? The pentacles seem to hold on harder to their money, the wands celebrate, and the swords rest and observe. The cups is an interesting case—discipline doesn’t come easy to the heart.

The fives correspond to The Hierophant in the major arcana and represent curiosity and exploration.

For every suit except for the swords, the fives seem to symbolize movement into a new beginning, but a rough one. The pentacles see it as a financial loss as do the cups (though with the cups it’s more about being sad than in trouble) and the wands experience new competition in their endeavours. The swords seem to take advantage of the exploratory nature of five.

he sixes correspond to The Lovers in the major arcana and represent peace and harmony.

It’s good times all around! The pentacles experience help, the wands, victory. The cups feel a familiar comfort from within and the swords gain needed peace.

The sevens correspond to The Chariot in the major arcana and represent enthusiasm and ambition.

Seven seems to bring high energy to all the suits, except for the pentacles. The pentacles experience ambition as a wait, something like waiting for seeds to sprout. The wands feel challenge from the outside as they go farther in their journey, and the swords experience straight out theft. For the cups, all the enthusiastic energy goes to their head.

The eights correspond to Strength in the major arcana and represent, of course, Strength and power.

How do each of the suits feel when they gain Strength and power? The pentacles and wands both channel it into their work, though the pentacles seem to slow down and enjoy craftsmanship while the wands experience a flurry of projects. The cups leave something behind, perhaps because they can do without it now. The swords experience a different kind of power, which is powerful turmoil. (Just goes to show you you can’t be cold and calculating all the time! Sometimes soft compassion is what you need.)

The nines correspond to The Hermit in the major arcana and represent self-knowing and spiritual Strength.

When each of the suits experience the quiet solitude of their own thoughts, they react differently. The wands, being fiery extroverts, don’t seem to take to nine particularly well. The swords experience anxiety and worry. The pentacles and cups, close to the body and heart rather than ideas and concepts, relish the moment.

The tens correspond to The Wheel of Fortune in the major arcana and represent new opportunities and luck. Ten also symbolizes the end of a cycle.

The wands and swords, being the ambitious ones of the suits, seem to experience the end of a cycle hard. This relates, again, to both these suits being more about big ideas for the future than the present moments. Because the pentacles and cups are more down to earth, they feel prosperity, stability, and “settling down” with ten.

What are your thoughts? Please comment if you have any insight of yours to add. Want to receive an update as soon as the next post comes out? Subscribe to the newsletter! Lastly, remember there are more in-depth card meanings in the tarot guide on this site. Thank you for reading.